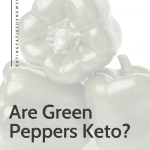 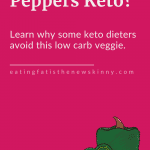 When you’re new to keto and a food crosses your mind, your first thought is – is it keto?

Did you ever think you’d question vegetables on any diet? And now you find yourself asking are green peppers keto?

You’re not alone! Plenty of people use their search bar to figure out if the vegetables they love fit into their low-carb diets. Keep reading to learn the truth about green bell peppers, why some keto dieters avoid them, and if you should include even keto-friendly vegetables in your plan. Are Bell Peppers a Keto-Friendly Vegetable?

Vegetables are one of those confusing topics on keto. Some say you need to eat all of the vegetables, while others tell you to avoid them since veggie carbs add up. To make it even more confusing, green peppers fall onto the nightshade vegetable list, while not even technically being a vegetable at all. Wait, what?

It’s true! Green peppers are technically a fruit since they contain seeds. According to Eufic.com, “Peppers are classified as fruit because they contain tiny seeds in the middle and grow from the flower of the pepper plant.”

The confusion comes in since most chefs refer to peppers as vegetables, while botanically they are considered a fruit.

OK, so I’m guessing you don’t really care if this tasty keto staple is referred to as a fruit or vegetable. You came to learn if it’s OK to add peppers to a keto friendly meal.

As with anything keto, it all comes down to the carbs.

So do green peppers have carbs? Yes! All plants contain carbs, which is why some new keto dieters believe they shouldn’t eat vegetables on keto. When considering which are the best low-carb vegetables, always ask these questions:

While there’s no such thing as any food being categorized as keto or not keto, some foods fit better into a keto lifestyle than others. The best way to know if this low carb vegetable fits into your keto plan is to look at the carb content.

How Many Carbs in Green Peppers?

In order to definitively answer the question are green peppers keto, let’s take a look at the nutritional value of green bell peppers: While that may seem like a big carb count per calorie consumed, you need to take a closer look at the health benefits to understand why it’s important to include more vegetables, like green peppers, in your easy keto recipes.

Bell peppers, which are sometimes referred to as sweet peppers, are great for overall health since they contain antioxidants that may reduce inflammation, decrease cancer risk, and protect fats from oxidative damage.

Keeping this low carb veggie in your plan is a great way to get more Vitamin A since one chopped cup contains 24% of the recommended daily intake. Peppers are also a good source of vitamin C, with a cup serving size providing 160% of the RDI.

If you swap a cup of chopped green peppers for red peppers, then the RDI of Vitamin A increases to 93%, while Vitamin C increases to 317% of your daily recommended requirement!

Is There A Difference Between Red and Green Peppers?

If you’ve ever wondered, do green bell peppers turn red – you’re onto something! Green bell peppers that are allowed to ripen longer change to warmer colors, like yellow, orange, and red. The longer they ripen, the sweeter they are. But if ripened peppers are sweeter, then what happens to the carbs when swapping red and green peppers?

Buyer beware – red bell peppers contain more carbs than the less ripened version. The same thing goes for both yellow bell peppers and orange bell peppers since they have similar nutrient profiles. Still, I wouldn’t add the sweeter peppers to your higher-carb foods list quite yet.

For example, 100g serving of red peppers contains 3.9 grams net carbs, whereas the same amount of green peppers contains 2.9 net carbs. While this could make a difference when eating large amounts of peppers, most keto dieters don’t consume bell peppers in high quantities.

If you eat bell peppers as a snack, keeping either version to a one-half cup serving only means the difference of .5 net grams of carbs. This means you should be OK to go with whichever option you prefer.

Remember, most people don’t struggle with weight loss from overdoing the veggies. At the same time, if bell peppers are one of your favorite keto treats, then stick to green when you plan to eat them in higher amounts. Also, combine veggies with healthy fats so you feel satiated before you have the opportunity to overeat peppers.

How Many Peppers Can You Eat on Keto?

If the first question new keto dieters ask is – are green peppers keto, then the follow up question is always how many can you eat?

The best way to determine how many keto-friendly peppers will fit into your plan is to figure out the macros where you get the best results. Then track your food in a macro app, like Cronometer.

While tracking food isn’t the most fun you’ll have all day, this helps you determine how many grams of carbs you have remaining on any given day. If you have enough grams of net carbs to add more bell peppers into your meal plan, then have at it!

(Psst … tracking is one of the tricks our Keto Decoded members use to finally lose weight with keto!)

Why Do Some Keto Dieters Avoid Green Peppers?

As previously noted, peppers belong to the plant family known as nightshade vegetables. This group also includes tomatoes, eggplant, potatoes, and spices made from these plants.

Nightshades contain small amounts of a chemical known as glycoalkaloids. While this natural pesticide helps the plant fight against pathogens, it can also stimulate an autoimmune response in some people.

One of the main symptoms of an intolerance to nightshade vegetables is inflammation. Since inflammation is the very thing you’re trying to improve with a ketogenic diet, those who are intolerant to nightshades are better off keeping them out of their keto diet.

What to Make With Green Peppers

Now that you understand the benefits of keeping green peppers in your keto plan, I bet you’re wondering how to eat more of these nutritious veggies. Here are just a few of my favorite ways to eat green peppers on keto:

How to Store Green Peppers

The last thing you want to do is buy a couple of green peppers to help keep you on track, only to watch as they go bad. Here’s some tips on storing green peppers so they stay fresh:

Do green peppers need to be refrigerated?

Even though you commonly find bell peppers on grocery store shelves, once you get them home – green peppers should always be refrigerated. They’re best stored in your vegetable crisper in a resealable bag.

If you accidentally leave a sliced pepper out at room temp, the pepper’s skin keeps it protected from drying out and rotting. Still, store sliced veggies properly in the fridge as soon as you can.

And since food poisoning is never fun – when in doubt, throw it out.

How long do green peppers last in the fridge?

Can you freeze green peppers?

Freezing green peppers is easy with a method known as tray freezing.

How to freeze green peppers: Slice, dice or cut the peppers the way you intend to use them. Then lay them flat in a single layer on a baking sheet and freeze. Once frozen, store in a freezer bag for up to 8 months.

Let’s wrap this article up by stressing the importance of a nutrient dense ketogenic diet.

While most dieters are still stuck in a calories in vs. calories out mindset, when it comes to long term weight loss – getting enough nutrients is far more important. When you focus on eating more nutrient dense foods, like green peppers, then the calories take care of themselves.

Swapping your focus from solely carb intake or calories to finally learning how to get the most nutrient bang for your buck is exactly how our students finally succeed with keto, even when no other approach seemed to work.

If you’re brand new to keto, or struggling to lose weight with a low carb plan, take the same course that’s helped hundreds of women finally get results! I teach you the tips and tricks I used to finally ditch yo-yo diets for good in the Keto Quick Start Course. 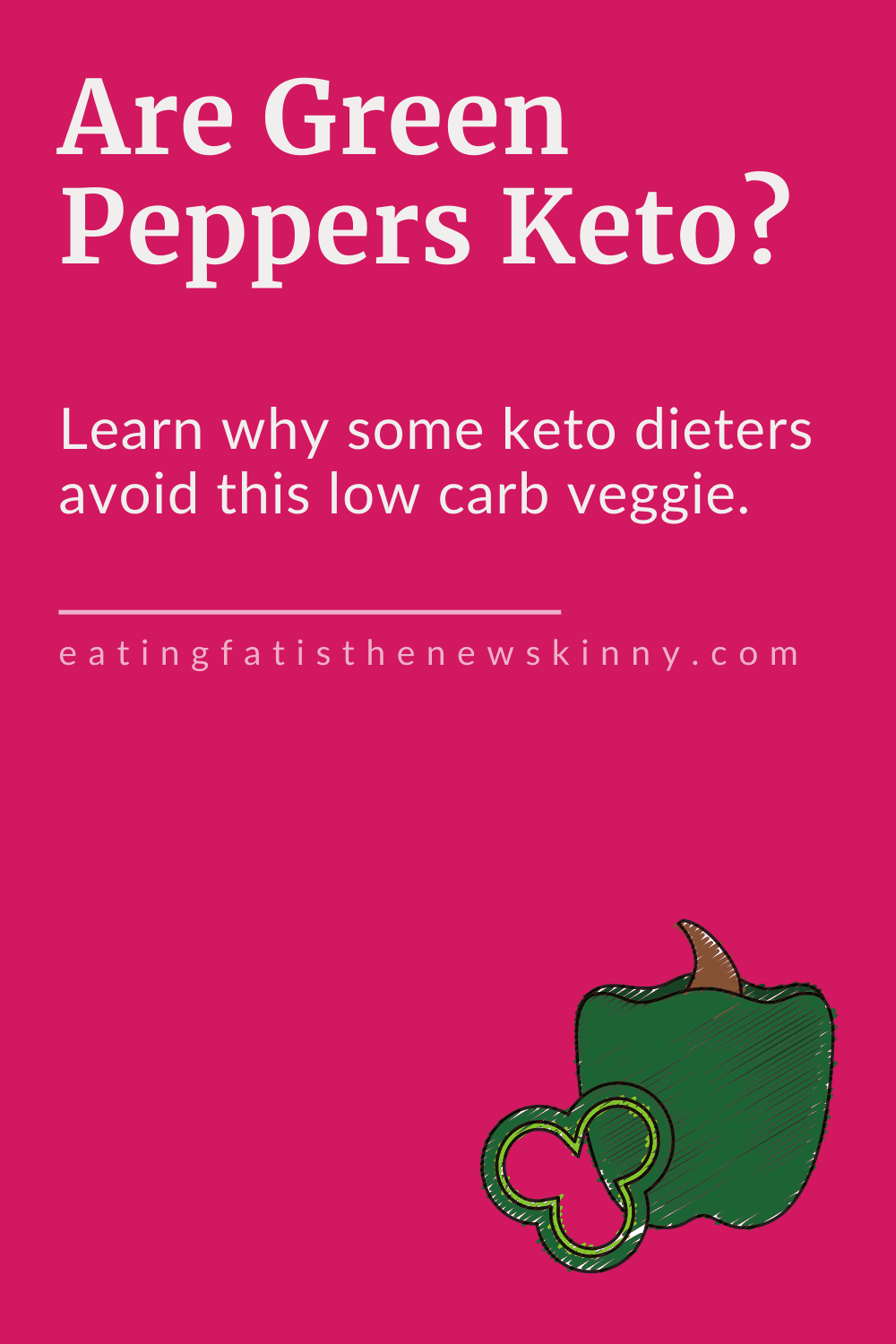 Can You Eat Broccoli on Keto?