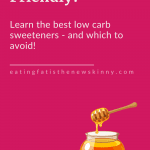 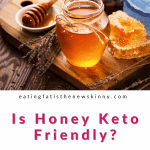 Honey is a superfood in most health food circles due to its anti-inflammatory and antioxidant properties. In fact, many diets encourage replacing sugar with honey since it has nutrients and enzymes not found in table sugar. But is honey keto?

While the health benefits of honey may be praised on other diets, downing honey by the tablespoon isn’t recommended on keto. Still, that doesn’t mean you should chuck your bear shaped bottle in the trash.

Keep reading to learn when honey is appropriate on a ketogenic diet, and when it’s time to ditch honey for an alternative keto sweetener. Honey is Natural – But is Honey Keto Friendly?

You may be wondering since the honey bees whip honey up into one of nature’s sweetest treats, why not use a tablespoon of raw honey on a low carb diet?

The total grams of carbohydrates in one tablespoon of honey is a good place to start.

There are 17 grams of carbs per tablespoon of honey. Even if you rely on grams of net carbs to get into ketosis, honey isn’t the answer since it contains zero dietary fiber. Since honey is made of pure simple sugars, there’s nothing to subtract.

Even all of the enzymes and antioxidants found in honey won’t save you from the glucose spike you’ll experience when you use even just a teaspoon of honey to sweeten your favorite low carb drink. Will Honey Kick You Out of Ketosis?

There’s no clear answer since everyone responds differently to honey. Still, large amounts of this high-carb food will kick most people out of ketosis. This is especially true when consumed with a liquid since liquid sugars spike insulin the quickest.

The key to keeping honey as part of your keto diet is moderation. If you include a small amount of honey in a recipe, like keto honey mustard dressing, then you can probably get away with it.

If your plan is to sneak in a teaspoon of honey here, or a tablespoon of honey there – that’s where the can I have honey on keto question gets you into trouble.

After losing 100 pounds with a low carb diet, I’ve had my fair share of both natural and artificial sweeteners. So which is better on a keto diet?

While I was able to lose weight while keeping low-carb sweeteners in my plan, most sweeteners aren’t the ketogenic saviors they’re cracked up to be.

Worse yet, your body understands how to process natural sugars like honey. When it comes to some of the keto-friendly sweeteners made in a science lab, not so much.

Allow me to explain in more detail so you understand the reasons I’m knocking your precious keto sweeteners. When you get a hit of honey, your body understands something sweet is coming. It gets to work breaking down the real sugar into usable energy. Of course just because something is natural – that doesn’t mean consuming large quantities is a good idea either.

Don’t confuse my kindness for weakness. Too much honey can and will kick you out of ketosis.

With that said, oftentimes when you consume artificial sweeteners made in a lab, your body becomes confused. When that sweet taste hits your lips, you just promised your body a dose of energy. Naturally, your body gets to work preparing to break down those sweet calories. Only, the calories never come. Your tongue tasted sweet, but the energy never arrives.

If you have a normal metabolism that’s able to get right back on track, that’s where this ends.

If you have insulin resistance from years of eating foods that aren’t right for you, this is when your body says: “Hold up – let’s slow things down since we’re obviously in a famine. I was promised food that never arrived, so yep – this is definitely a famine.”

When you continue to eat highly sweetened foods all day, everyday just because they’re keto-approved – that’s when the “healthier alternative” becomes a problem. I am telling you that while you’re cutting back on things like white sugar, natural honey, coconut sugar, and maple syrup, it’s also a good idea to not overdo sugar substitutes just because you read they keep your blood sugar levels in check.

Still, there are times that require a keto honey substitute. The good news is there are some healthy low-carb alternatives you can use to replace traditional sweeteners.

This non nutritive sweetener is made from the stevia rebaudiana plant. While it’s a great way to sweeten recipes, many keto dieters complain about its bitter taste.

Even though stevia is up to 150 times sweeter than regular sugar, it still takes getting used to due to the bitter aftertaste. If you want to increase the sweetness level of recipes with stevia, use this stevia cheat sheet. When it comes to this natural product, buyer beware! Tricky food manufacturers cut stevia with other bad-for-you sweeteners, like maltodextrin and dextrose. This is especially true when it comes to a powdered form. Always check the ingredients before buying even organic stevia.

Even though the liquid form is typically more pure, do your due diligence and always read the nutrition label.

Monk fruit sweetener is a zero calorie sweetener due to the chemical makeup of this low carb sweetener. (You remember when we chatted about how your body responds to chemicals, right?)

Still, if you need a keto-friendly sweetener, this is one of the better choices. When adding monk fruit to real food recipes, keep in mind that it’s 100-250 times sweetener than sugar. Like stevia, monk fruit is commonly mixed with fillers that could kick you out of ketosis. Always check the label to avoid unnecessary ingredients.

Monk fruit is shown not to raise blood glucose, however it does raise insulin levels. While this spike is said to be minor, always test for yourself how monk fruit affects your state of ketosis.

If you include sweeteners like monk fruit, but experience weight loss stalls – it’s best to remove sweeteners completely. This can help you determine if sweeteners are the cause of your keto diet stall. This keto-friendly sweetener comes from the sweet syrup of the yacon plant, a tuber grown in South America.

Yacon syrup is considered keto friendly since your body isn’t able to digest a large portion of the syrup. It’s one of the best sweeteners since yacon syrup only has 20 calories per tablespoon, while a tablespoon of table sugar contains almost 50 calories.

However, you need to keep those nutrition facts in mind when sweetening recipes with yacon syrup. Since this sweetener still contains 11 grams of carbs per tablespoon, you don’t want to use this sweetener in large quantities.

Fair warning – some of the best sugar alternatives found on other lists top the worst low carb sweeteners on my list. Perhaps this is because I actually follow a keto diet, unlike others who talk the talk, but never walked the walk. With that said, here are some sweeteners others consider keto friendly, but in my humble keto opinion, you’re better off keeping sweeteners out of your plan.

So many keto blogs recommend this sugar alternative, and I just can’t understand why.

Sucralose passes through your body undigested, which is why it’s considered keto-safe. But what about all of the studies that show these kinds of artificial sweeteners actually lead to weight gain?

This occurs even more often when it comes to overweight individuals who commonly use these sweeteners.

And as if weight gain isn’t bad enough, what about the negative health consequences from keeping the really bad-for-you sweeteners like Sucralose in your plan?

I don’t care if Sucralose has a low carb count – it’s bad news bears as far as this keto expert is concerned.

Erythritol falls into the category of sugar alcohols. Even though it’s 80% sweet as sugar, it only contains 5% of the calories found in regular sugar. So what’s the problem? Products that contain erythritol, like Swerve, are perfectly keto friendly – right?

Perhaps friendly is the wrong word to use since these kinds of products can put your body at war. Even with the studies that show erythritol lowers blood sugars in your body, that doesn’t really matter when a food causes excessive digestive problems. The stress from digestive issues can be enough to keep you out of ketosis. Some of the digestive effects that may occur with larger doses include diarrhea, headache, stomachache, and gas pains. This happens to some keto dieters since your body doesn’t break erythritol down, which means it passes through your gastrointestinal tract intact.

While this substitute isn’t problematic for everyone, it’s still on my avoid list since it’s overused in keto products. This leads many keto dieters back to eating too many keto junk foods, rather than focusing on a real food plan that gets results.

Can You Eat Honey on Keto?

Let’s be clear – there are many other low carb sweeteners you should avoid on a keto diet. Some of these include maltodextrin, dextrose, agave, and other sugar alcohols not mentioned like xylitol and sorbitol, which could also have a laxative effect.

While natural sweeteners (like honey) fall on the most lists of sweeteners to avoid – I prefer to limit these sweeteners to small amounts in keto recipes rather than completely avoid. But that’s what works for me and my version of keto.

Different people respond to sweeteners in different ways. If you notice even a little honey keeps you out of the metabolic state of ketosis, then it’s best to avoid completely.

But if you struggle to maintain ketosis with even a small serving size of honey, that doesn’t mean it’s a good idea to load up on other sweet treats just because they use a sweetener that’s marketed as keto-friendly. The key to kicking sugar cravings to the curb on a keto diet is to limit most sugar consumption – whether it’s the natural kind or manmade.

Keeping carb intake low by limiting high carb foods like honey is only half the battle. Why not learn all of the tricks I used to finally lose weight with a high fat diet?

Get the same information hundreds of women have used to finally lose – even when other keto approaches didn’t work! Check out the Keto Quick Start Course to help you follow keto the right way so you finally get results! More Articles from Eating Fat is the New Skinny:

How Long Does Coconut Oil Last?