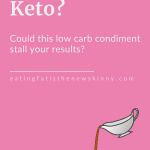 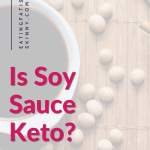 It’s important to pay attention to condiments and sauces on keto. Even though many are low in calories, these flavorful extras can wreak havoc on a keto diet.

In fact, even low carb sauces aren’t always a great idea. So what about a controversial ingredient that’s common in many marinades and sauces – is soy sauce keto?

Keep reading to learn if including soy sauce in keto recipes is a good idea, or if you should skip traditional soy sauce for best results on a ketogenic diet. What is Soy Sauce?

Soy sauce, also known as soya sauce, is made by fermenting soybeans. It’s a brown liquid that adds a salty, sweet, and umami flavor (savory) to sauces and marinades. It’s also used as a condiment for Asian cuisine, as well as an ingredient in many soups and stews.

Can You Have Soy Sauce on Keto?

Is there such a thing as a keto friendly soy sauce? Since it’s easiest to answer that question with the nutrition label, let’s start there.

When glancing at the label, the soy sauce nutrition info seems like it fits into a keto diet. While different brands vary, calories in soy sauce is around 8 calories per tablespoon, with a total of .8 grams of carbs. Examples that include low grams of net carbs per tablespoon include tamari (a Japanese soy sauce), koikuchi, and light Chinese soy sauce. Different versions are used for a different flavor profile in recipes. Tamari soy sauce is typically used when a gluten free soy sauce is necessary.

Of course soy sauce carbs can vary depending on the type you choose, so always check the nutritional information for the total carb count.

So is soy sauce keto friendly?

If you follow a dirty keto plan that’s only concerned about the carb content of keto meals, then most brands of soy sauce fit into a low carb diet. Since a sweet variety with 9 grams of carbs per tablespoon won’t work, skip soy sauce brands with added sugars.

If you follow dirty keto, you can stop reading here. However, if you prefer long term weight loss the easy way, keep reading to learn the different reasons this keto-friendly condiment isn’t quite so friendly on a clean keto diet.

While many tout the health benefits of soy, there’s also many who advise you to steer clear from products made from soy.

So who’s right? Should you enjoy soy sauce as part of a healthy diet?

When most people point out the negative effects of soy sauce, they blame its high sodium content – and for good reason. One tablespoon of soy sauce contains around 875 milligrams of sodium, which is 38% percent of the recommended daily intake. Yikes.

Not so fast. There are other reasons beyond the sodium found in regular soy sauce that may leave you avoiding this popular ingredient in your favorite recipes.

Some negatives of including soy in a healthy keto diet include:

So what do all of these possible negative health impacts of soy mean for you? According to mashed.com, “The process of creating soy sauce results in 300 compounds associated with various health concerns.”

Even though it may be OK to keep a small amount of popular soy products in your meal plan, if you include too much of this fermented product in your diet – you could be setting yourself up for future hormonal imbalances.

While soy sauce can affect both men and women’s hormones, it’s especially harmful to women’s health. Soy is associated with an increased risk of breast cancer, and it may interfere with a normal menstrual cycle.

Men may want to avoid soy products as well since it’s been shown to impact a man’s sperm count.

Soy has also been shown to interfere with the thyroid when consumed in excess. If your goal with following a healthy diet is to lose weight, poor thyroid health can make weight loss seem impossible. When you’re fed up with quick fix diets, most people gravitate towards a cleaner keto lifestyle. Instead of only worrying about total carb intake, you start paying attention to ingredients used in keto foods, and how they affect your body.

One reason many low carb practitioners recommend against soy is due to the wheat used while fermenting soy. This means most soy sauces contain gluten. Clean keto is essentially a gluten-free diet since keeping wheat in your diet has a negative effect on gut health.

Furthermore, many start a keto diet due to health concerns like high blood pressure. With a daily sodium intake of 38% per tablespoon, enjoying too much soy sauce can exacerbate this health issue.

While it’s true keto has the potential to lower blood pressure, and many keto dieters need to increase key minerals to avoid the keto flu, the sodium found in soy sauce isn’t the right way to increase mineral levels.

A high quality sea salt is a much better alternative to sodium found in processed food sources. Increasing salt intake with a mineral rich salt is much preferred for better health than overdoing highly processed foods with excess sodium.

Also, high blood pressure isn’t the only health concern when it comes to too much sodium. Too many processed foods filled with sodium can lead to other health problems, such as kidney stones, heart failure, and stroke.

With all of the potential side effects that come with soy, keeping soy sauce as a regular part of a keto diet isn’t a great way to improve health. Instead, try a keto soy sauce alternative like coconut aminos in recipes like coconut fried rice, chicken stir fry dishes, and more.

Most soy sauce is fermented with wheat, which means it contains gluten. Tamari is a popular gluten free soy sauce.

How many carbs in soy sauce?

What are the best keto soy sauce alternatives?

A good substitute for soy sauce on keto is coconut aminos. Keep in mind, the amount of carbohydrates will be higher – but if you use a high amount of this popular condiment, avoiding the negative side effects are worth a few extra carbs.

The Keto Soy Sauce Wrap Up

Even though including soy sauce in a low carb diet doesn’t affect blood sugar, it’s not a good idea to use large amounts of soy sauce in a clean keto diet due to other potential health hazards. If you’ve already found success on dirty keto, you may not heed this warning.

Keep in mind most dirty keto results don’t last as long as following a clean keto plan. This is because health improvements are what leads to long term weight loss. Simply reducing net carbs without paying attention to the quality of ingredients won’t lead to improved health.

If you’re finally ready to quit quick fix diets for good, then check out our free keto masterclass. You’ll learn the 3 biggest mistakes most keto dieters make – including following dirty keto for too long.

These are the same mistakes I made for decades before losing 100 pounds with a low carb lifestyle I love. Can You Eat Sugar-Free Jello on Keto?